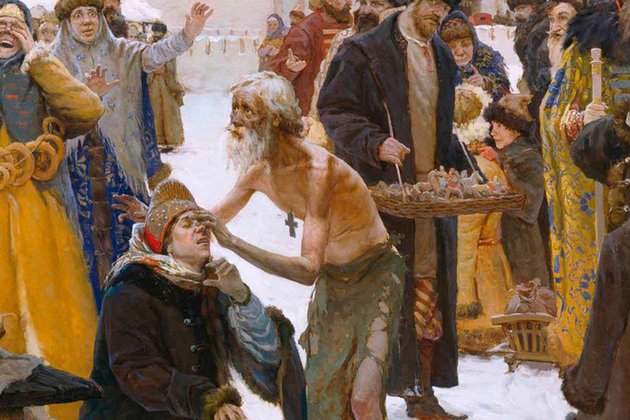 Графов Виталий Юрьевич/v-grafov.ru Naked, dirty & forever mumbling their prayers, they could proffer raw meat to a tsar, call him a bloodsucker and yet still be invited to a royal feast afterwards. Their "supernatural" powers inspired awe in nobles and peasants alike.

When in 1570, Tsar Ivan the Terrible approached the city of Pskov with his army, his plan was to brutally punish inhabitants of the city for their repeated attempts to disobey the Moscow Tsar. Pskov residents, expecting a terrible massacre, nevertheless went out to meet Ivan, greeting him with bread and salt. Then, according to the chronicles, something strange happened. A naked man, covered in filth, stepped forward from the crowd and handed a piece of raw meat to the tsar, saying: "Does Ivashka think that eating a piece of animal meat during a fast is a sin, whereas eating as much human meat as he has already eaten is no sin?" The beggar was referring to atrocities committed by Tsar Ivan, as he was cruelly subjugating other Russian cities to Moscow's rule.

Who could be rude to the tsar and get away with it? Only a holy fool. This is exactly who the beggar was, known as Nicholas Salos of Pskov ("salos" in Greek means "a holy fool"). Legend has it that this gesture saved the city of Pskov from the tsar's reprisals: Ivan the Terrible got ashamed of his cruelty and left the city.

"Alexander of Macedon before Diogenes of Sinope" by Ivan Tupylev

Holy fools, also known as 'blessed fools,' were known in Ancient Greece (the most famous of them was Diogenes of Sinope, who lived in a barrel), as well as in Muslim countries (Sufis), India (bhakti yogis), Buddhist regions (nyonpa yogis). And everywhere they had their peculiar characteristics. In the Eastern Orthodox tradition, they were called 'yurodivy' (юродивый), or 'pokhab' (похаб). It is no coincidence that the word 'yurodivy' ("holy fool") sounds very similar to the word 'urod' (урод, 'freak'). The more appropriate name for a person like that is a 'fool for Christ', which emphasizes that the person's behavior is not the result of mental illness, but of religious zeal.

Hence the difference between holy fools and jesters: the latter behave comically and provocatively only during festivities, whereas the former remain in an ecstatic, loony state their whole life.

The concept of foolishness for Christ came to Russia from Byzantium. The earliest known holy fool in Russia was Isidore, who lived in Rostov in the second half of the 15th century. His nickname was Tverdislov: most likely, in reference to the fact that he constantly repeated the same word or phrase. Isidore lived on a swamp and wore brushwood for clothes. It was said that he exposed princely power. In the 16th century, he was posthumously pronounced a saint.

Icon of Isidore the Blessed

Foolishness for Christ became truly popular in Russia in the 16th century. Holy fool Arkady of Vyazma, according to legend, had the ability to see snakes hiding in jugs and pots and repeatedly "exorcized" them, breaking said pots. In Rostov, there was Ioann Vlasaty, and in Moscow in 1547, Maxim of Moscow, a holy fool who lived a century earlier and had been known for walking about naked, was proclaimed a saint. Very little is known about his life, but still he was also revered as a holy fool.

The most famous holy fool in Moscow, Basil the Blessed, or Basil Fool for Christ, who Saint Basil's Cathedral on the Red Square was named after, also walked about naked. His life story is an amalgamation of all the classical tales about holy fools: he walked about naked, he rampaged through merchants' stalls, smashing pots and dishes, and, of course, he would admonish the tsar for his cruelty. One could say that holy fools sought to imitate Christ, who wore rags, preached to his followers and was persecuted by those in power.

Tsar Ivan himself promoted foolishness for Christ and holy fools. He helped carry Basil the Blessed's coffin and it was during his reign that Procopius and Ioann of Ustyug and Maxim of Moscow were recognized as saints. Being the first Moscow Tsar, he sought to show his devout religiosity and piety: according to Greek Orthodox tradition, holy fools were considered to be the truest, most selfless believers. Thus, for Ivan, those actions were an element of his religious and social policy.

Maxim the Blessed of Moscow, an icon of 18th century

Foolishness for Christ flourished in Russia under Ivan the Terrible's son Feodor I (1557-1598), who was a devout and quiet ruler. Immediately after Feodor ascended to the throne, miracles began to happen on the grave of Basil the Blessed, and in 1588, he was canonized and buried in the churchyard of the Cathedral of the Intercession on the Moat, which from then on became known as St. Basil's Cathedral. Interestingly, the canonization of Basil the Blessed was timed to coincide with the visit to Moscow of Patriarch of Constantinople Jeremias: by canonizing the holy fool, the Moscow Tsar and the church authorities wanted to impress the distinguished guest with their piety.

However, where there are saints, there are sinners, too. Already by the 1630s, the church authorities realized that the phenomenon of foolishness for Christ was often exploited by fraudsters. Patriarch Joasaphus wrote in 1636: "Some pretend to be feeble-minded, and then they are seen being fully sane." In 1646, he banned holy fools from entering churches because "their shrieks and squeaks prevent believers from hearing divine singing". In the same period, in people's perception, "real" holy fools got mixed up with feeble-minded and mentally ill people, whose madness gave them a halo of holiness. Those people began to be called "blagoyurodivye" ("благоюродивые"), or virtuous fools for Christ.

Among the general public, foolishness for Christ became popular in the 17th century, when the majority of "folk" stories about these people took shape. Despite cases of fraud, holy fools continued to be received in royal palaces. Greek Orthodox priest and chronicler Paul of Aleppo, son of Patriarch of Antioch Macarios III, who visited Russia in 1654-1656, attended a feast with Patriarch Nikon and saw the reverence with which the latter treated a holy fool: "That day, the patriarch sat beside him at the table a new Salos, who walks through the streets naked. There is great faith in him and he is revered beyond measure as a saint and a virtuous man. His name is Cyprian; people call him a Man of God. The patriarch constantly served him food with his own hands and offered him drink from silver goblets, from which he drank himself. Furthermore, he received the last drops into his mouth, for sanctification, and so it was until the end of the meal. We were surprised."

The archdeacon's surprise was understandable: by that time, the Greek Orthodox Church considered almost all holy fools to be swindlers. In 1666, Macarios III and his son Paul visited Moscow again to participate in the Great Moscow Synod, which in a special canon condemned false foolishness for Christ. Gradually the veneration of holy fools declined: from 1659, Basil the Blessed was no longer remembered in the Assumption Cathedral in the Kremlin, and in 1682, he was remembered only in the Church of the Intercession on the Moat, where he was buried.

The final blow to foolishness for Christ was delivered by Peter the Great. He wrote: "These fools... do great harm... to [the] fatherland. Let any prudent person consider how many thousands of those lazy beggars there are in Russia... who with their impudence and pretend humility consume other people's labor... Truly, there is no more lawless order of people!" From the beginning of the 18th century, foolishness for Christ was punishable by torture and jail. Yet, for many more years, various blessed fools and pilgrims were wandering around Russia, begging "for the sake of Christ" and exploiting Russians' weakness for foolishness for Christ.

HONG KONG - HSBC, the largest of Hong Kong's three currency-issuing banks, said on Tuesday it plans to cut as ...

MILAN - The cardinal's response was not what Yolanda Martinez had expected - or could abide.Her son had been sexually ...

DAMMAM, Saudi Arabia - A baby boy kidnapped from hospital 3 hours after he was born more than twenty years ...