Czech president sent back to hospital 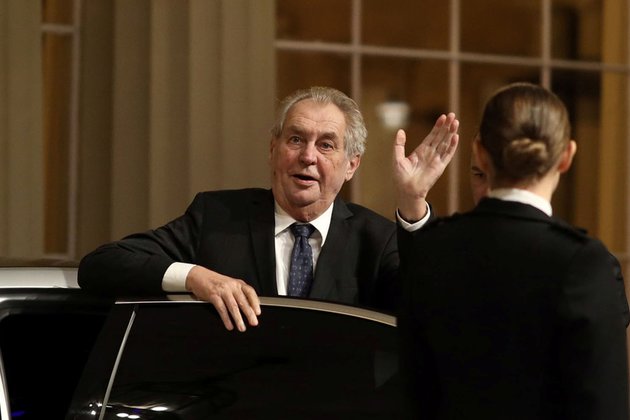 Czech President Milos Zeman has been sent to hospital after testing positive for Covid-19. The test came hours after he was discharged from a healthcare facility, where he spent some six weeks due to an undisclosed diagnosis.

The hospitalization of the 77-year-old official was announced by the Czech presidency late on Thursday. Zeman was taken to the Central Military Hospital (UVN) after testing positive for the coronavirus at the presidential retreat at Lany, outside of the country's capital city of Prague.

"The president's program will be suspended pending the treatment of Covid-19," Zeman's office said in a statement.

Zeman was discharged from the UVN earlier in the day, having spent around six weeks there. The president was originally hospitalized on October 10 and placed in an intensive care unit, where he remained during most of his stint at the facility.

While no diagnosis has been officially confirmed, local media reported that Zeman's prolonged stay at the UVN was due to a liver condition. The presidency offered little clarification on the issue, saying only that he was treated for a chronic illness.

Regarding his positive test for Covid-19, the president has reportedly shown no symptoms of the disease. According to local media, he had previously been vaccinated against the virus at least three times.

NATO chief: Countries should prepare for Russian incursion in Ukraine

RIGA, Latvia: Jens Stoltenberg, secretary-general of the North Atlantic Treaty Organization, has warned that the American-led military alliance should be ...

PARIS, France: The French government is offering increased autonomy for the Caribbean island of Guadeloupe, after COVID-19-related riots and long-running ...

FRANKFURT, Germany: A surge in new COVID-19 cases left an uneasy feeling hanging over Frankfurt's Christmas market, as well as ...

NATO chief: Countries should prepare for Russian incursion in Ukraine

RIGA, Latvia: Jens Stoltenberg, secretary-general of the North Atlantic Treaty Organization, has warned that the American-led military alliance should be ...

JOHOR BAHRU, Malaysia As buses of vaccinated Malaysians working in Singapore were ferried across the Causeway Bridge that connects the ...

SAGAING, Myanmar - According to the local residents, soldiers have torched roughly 20 houses and two barns in communities in ...

KENT, Washington: Blue Origin's New Shepard spacecraft will launch on 9th December, its third piloted flight, with a crew of ...

DHAKA, Bangladesh - Following a bomb threat on board, a Malaysia Airlines flight made an emergency landing at Hazrat Shahjalal ...

PARIS, France: The rebuilding of Notre Dame Cathedral in Paris has come under fire from critics, after the new plans ...

The Godfather Coda: The Death of Michael Corleone